BIG NEWS!  We're broadcasting live-to-Facebook daily now and today, I brought the Snake Oil Band into my woodshop to perform Prince's "Starfish and Coffee."  See the video on my official Facebook.  (Don't have Facebook?  See it on Youtube here.)

The Prince cover is a song both Ronn and I have loved for years.  And get this... RONN SINGS LEAD!

In addition to the Prince tune, we also attempted a live broadcast with Hee Haw music and a cover of John Cougar's "Pink Houses."  See that video here.

A quick inspirational note:  Last week, I took a journey up to C. B. Gitty's headquarters where we decided to go "all-in" with Facebook Live videos. 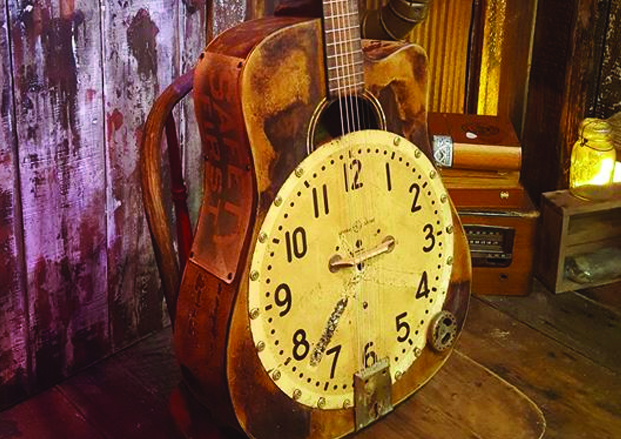 And a strange thing happened...it sparked a pure renaissance up at Gitty HQ.

They are now planning several live shows online per week, which means they're all tuning up their instruments, building new ones (see the clock guitar here) and they're jamming together.

C. B. Gitty is filled with jamming!

It's one of the most beautiful things I've seen in a long time and truly makes me proud to work with them.

Ok...on to other amazing things:

Glenn is one of my biggest influences of all time!  Not only did I grow up with Rez Band cassettes but his Kaiser/Mansfield blues albums introduced me to Blind Willie Johnson...which led me to cigar box guitars.

Yeah, his influence is that huge.

The "Mi Amor" cigar box guitar.
Currently on tour with Shane Speal.
Get yours here