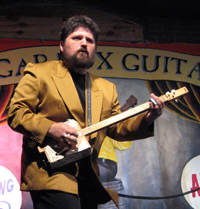 SONGS INSIDE THE BOX:
The Max Shores Cigar Box Guitar Documentary featuring Shane Speal
Coming to a PBS station near you in 2010

Add a stick and some strings to a wooden cigar box and you’ve got an inexpensive musical instrument, a cigar box guitar. Each one is an original and some people say that each one has its own songs inside. These unique guitars and the people who make music with them are the subject of an upcoming documentary on Alabama Public Television.

The revolution is all about having fun building instruments and playing music. Daniel Carter Beard, one of the founders of the Boy Scouts of America, published instructions for building a cigar box banjo in 1870. His programs were designed to help boys find their hidden inner savage. 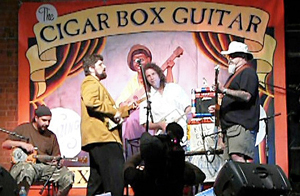 “When you pick up a cigar box guitar, it’s like putting on a mask for Halloween,” says Huntsville blues guitarist Microwave Dave who appears in the documentary. “It gives you license to do whatever you want because nobody knows what to expect.”

Cigar box instruments have provided inexpensive entertainment since the 1800s and many professional musicians, including Jimi Hendrix, started their careers with cigar box guitars. “Songs Inside The Box” includes performances by over a dozen different musicians and information about how to build and play your own instrument.

“I’ve had the opportunity to present this documentary at several film festivals,” said director Max Shores. “People in the audience laugh at the characters on the screen initially but then they begin to identify with them. By the end of the film a lot of people decide to build their own instrument and write their own songs,” he continued. “It’s an amazingly powerful way to express yourself.”
Shores is a producer-director in the University of Alabama Center for Public Television and Radio which is a service division of the College of Communications and Information Sciences providing instruction and practical experience on high quality productions to students.